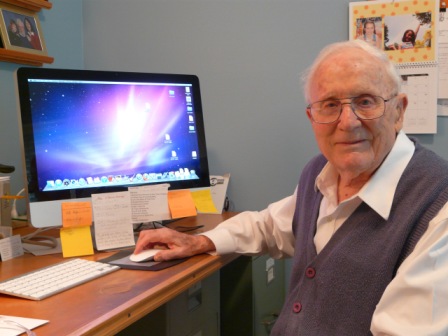 Harry Benford at his typewriter 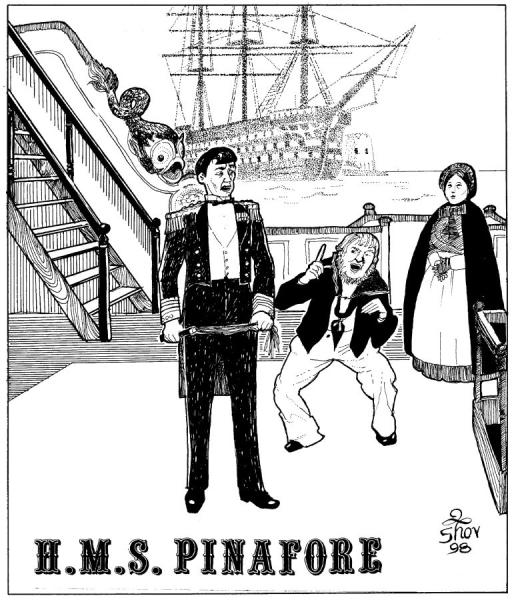 H.M.S. Pinafore was Gilbert and Sullivan’s first great joint success, and it brought them outstanding fame on both sides of the Atlantic. The show opened at the Opera Comique on May 25, 1878. Although initially well received, an exceptionally hot summer kept audiences away until Sullivan started playing selections from the show at promenade concerts for which he was the musical director. That turned the tide; the opera went on to run for more than 570 performances, and it has been one of the most popular works on the musical stage ever since.

In H.M.S. Pinafore Gilbert satirizes British class consciousness and pokes fun at a First Lord of the Admiralty who knows little about ships –– which just happened to be true to life in England at the time. In Pinafore, too, Gilbert firmly established the style of producing humor by treating a thoroughly ridiculous situation in a thoroughly serious manner. He added to the effect by insisting on accurate settings and costumes, and by rigidly restraining actors who wanted to ham up his lines or engage in any sort of slapstick. H.M.S. Pinafore remains a joy as well as a landmark in the history of musical theater.

His, or Her, Majesty’s Ship. Signifies a ship of the Royal Navy.

A child’s dress or apron. Allen (3) says there is reason to think that Gilbert had originally named the opera H.M.S. Semaphore (anything nautical to rhyme with “one cheer more”) but changed it to Pinafore at Sullivan’s suggestion. Naming a fighting ship after such an unprepossessing item of apparel must have appealed to Gilbert’s sense of the ridiculous, particularly as it contrasted with such formidable names as Goliath, Audacious, Minotaur, and Majestic (which were in Nelson’s fleet). Then give three cheers for Sir Arthur’s part of the libretto! An incidental note: Shipley (266) imagines that the term arose from a mother’s admonition, “Don’t spot your dress. Here’s something to pin afore it.”

Right Honourable is a prefix accorded certain high-echelon politicians, judges, and others distinguished for their public service who have been appointed members of the Queen’s Privy Council (243). A Privy Council is “a body of advisors, theoretically selected by the sovereign, whose function it is to advise the sovereign in matters of state” (250). Despite the elaborate uniform invariably affected by Sir Joseph, the First Lord of the Admiralty is not an admiral, but a politically appointed civilian responsible for managing the navy. Prestige (243) notes that in the traditional D’Oyly Carte productions his uniform “was that of a Privy Councillor, with the badge of a K.C.B., to both of which he was fully entitled.” Hyder (160) adds the warning that he should never wear epaulettes because they are accouterments reserved strictly for military officers.

Speaking of Privy Councilors, I am reminded of Queen Victoria’s favorite Prime Minister, Benjamin Disraeli. When asked how he managed to get along so well with her, Disraeli replied, “I never refuse; I never contradict; I sometimes forget” (203).

Knight Commander of the Bath. In England, one of the highest orders of knighthood. “Bathing as a purification ritual was probably introduced in a religious context with knighthood in the 11th century” (225). See also The Sorcerer and Utopia, Limited.

In time each little waif
Forsook his foster-mother,
The well-born babe was Ralph ––
Your captain was the other!!!

The other seamen on the Pinafore are given nautical-related surnames, and we wonder if Gilbert intended the same for Ralph. The word is uniformly avoided by all ordinary dictionaries that come to hand. I did, however, find a 1921 seaman’s manual (31) that defined rack as slang for a berth. See also Gibson (125). So I propose that Ralph’s surname might refer to straw-filled ticking. Hyder (161) comments that, although the other sailors have seagoing names, “Ralph is a man set apart. Anyway, Gilbert never liked tenors.” In any event, Gilbert might have derived quiet pleasure in assigning a seaman such a bucolic-sounding name, for the expression “to rack straw” means to pitch straw into a storage rack. Knight (177) says “This was a demonstration of Ralph’s rustic background in opposition to Josephine’s supposed superior social status.” Kesilman (47) agrees that Rackstraw implies humble origins, but disagrees with the bucolic association. He points to Josephine’s lament about what life would be like with Ralph. In it she describes a squalid urban setting.

A sailor certified as possessing all-around nautical capabilities; one step above the lowest rating, or ordinary seaman. Such seamen are more often referred to as “A.B.’s,” short for able bodied seamen. 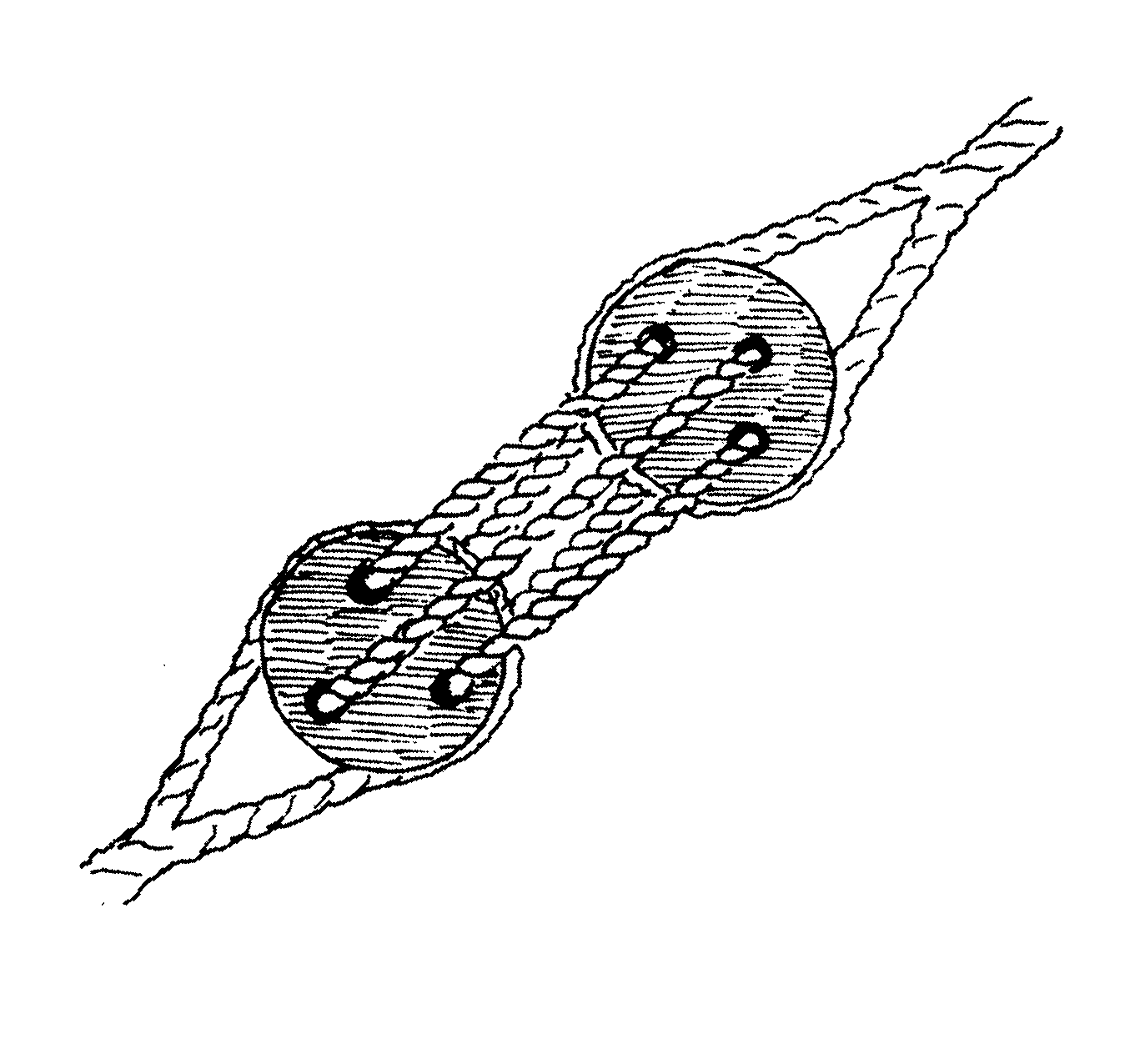 A deadeye is a round block of wood with three holes drilled through the flat face. They are used in pairs as a crude block-and-tackle to maintain tension in the shrouds supporting a mast. Deadeye is clearly a superb name for a one-eyed character.

A bobstay is a wire, rope, or chain running from the end of the bowsprit diagonally downward to the stem of the ship. Its function is to keep the bowsprit from being pulled upward by the tension in the forestay. See picture of nautical terms.

A boatswain is a non-commissioned naval officer who supervises work ordered by a higher ranking officer. The word is usually pronounced “bosun.” A boatswain’s mate is his assistant. Brewer (56) says the “swain” comes from the Saxon word swein, meaning a boy or servant.

A becket is a short length of rope used to secure coils of line, spars, oars, etc. For convenience, it is usually formed with an eye (loop) at one end and a hook at the other.

The OED (228) defines this as a sailor’s perversion of midshipman. The latter is defined as “in the navy, the designation of a rank intermediate in the line of promotion between that of naval cadet and that of the lowest commissioned officer (i.e., in the British navy that of sub-lieutenant, in the U.S. navy that of ensign).” Another definition is “a diminutive midshipman” (115). As traditionally cast, the midshipmite is indeed a little mite of a lad –– a Gilbertian visual pun.

A boat that goes from ship to ship in a harbor, selling articles to seafarers. Bosdêt (43) suggests the term was derived from the fact that the boats developed from scows that, in the seventeenth century, had been used to transport dung out to sea, hence the disreputable name.

The chief naval base in Great Britain.

A man-of-war is a naval vessel, and the second “men” refers to her ratings, i.e., her unlicensed crew.

The mundane meaning is simply molasses –– which is the residual product of the sugar refining process. But the word has an older and more romantic meaning: an antidote for the bite of wild beasts. Venice treacle, for example, was a compound of 64 drugs in honey –– which sounds like the electuary mentioned in The Yeomen of the Guard. See Brewer (54). Paulshock (238) avers that the best treacles always included “chopped, powdered, or distilled vipers, as well as opium, honey, and a slew of other ingredients, many very rare and difficult to obtain.” She adds that “the original recipe called for periods of storage for up to ten years to allow all 50 or so ingredients to ferment and blend … ” I think that is all very interesting; but I also think Buttercup was selling molasses, or something like it, and not that vile medicine.

Grand Pierre (144) defines this as baker’s bread. Sailors use the term in contradistinction to biscuits (115).

Slabs of meat with the bone still attached.

The term can mean either rabbit meat or rabbit fur. In the context, meat seems more likely.

Collins (75) says this is “A kind of partly-cooked sausage.” Hyder (161) says the word is a corruption of Bologna, the city of its origin. The American corruption is baloney.

HMS Pinafore, Act I: 1476
Spithead [the reddest beauty in all Spithead]

The sheltered stretch of water between Portsmouth and the Isle of Wight.

HMS Pinafore, Act I: 1477
Dissembled [I have dissembled well]

She means she has used various artifices to improve her figure and complexion. Another interpretation is applied to the same word in the second act.

HMS Pinafore, Act I: 1478
Canker-worm [there may lurk a canker-worm]

A destructive grub or caterpillar. Buttercup is speaking figuratively and hinting at her dark secret. Her words remind us of Shakespeare’s lines in Twelfth Night: “She never told her love, but let concealment, like a worm i’ th’ bud, feed on her damask cheek.”

Dick Deadeye is usually portrayed as permanently bent at the waist and with one shoulder carried higher than the other in a deformed, almost triangular configuration.

The word has several meanings. In this case it means a lover’s lament set to music.

HMS Pinafore, Act I: 1481
Minstrelsy [The pearl of minstrelsy]

The art or practice of a wandering poet or musician.

A menial is the humblest sort of servant, one assigned to do the most degrading tasks. Proofreading lexicons is a depressing example.

HMS Pinafore, Act I: 1483
Some nautical terms [Drawing of ship with numbers]