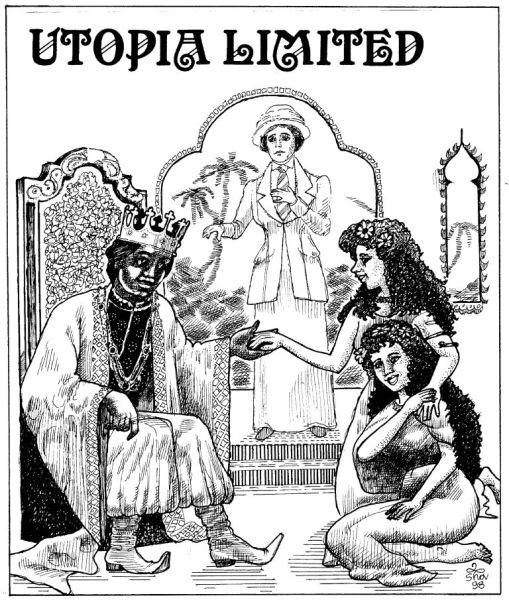 Although The Gondoliers was completed in a period of happy reconciliation, the cordial relationship was soon shattered by a bitter quarrel. It started out between Gilbert and Carte, but Sullivan was forced to take sides and chose to ally himself with Carte. The fight was sparked by a bookkeeping question relating to new carpeting in the theater. Gilbert believed that Carte’s allocation of the expense was unfair to both Sullivan and himself in that it reduced their rightful share of the profits. That was the start, and it led to other accusations and personal attacks. Gilbert, who always loved a battle, took the matter to court and won his case. This acutely embarrassing public brawl was extremely distasteful to Sullivan. The partnership lay shattered, and the composer turned his undivided attention to the grand opera which his Queen had suggested. Ivanhoe opened in Carte’s new Royal English Opera House early in 1891. The opus was well-received and enjoyed a long run. Unfortunately, Carte had not commissioned a replacement, so Ivanhoe failed to generate a lasting demand for English opera. Ironically, although Queen Victoria had suggested a grand opera, when she wanted entertainment at Windsor Castle it was The Gondoliers, not Ivanhoe, that she specified. Sullivan now felt compelled by sheer economic necessity to rejoin Gilbert. The latter, meanwhile, had in all probability learned about Kaiulani,

a thirteen year old Hawaiian princess and heiress-elect to the Hawaiian throne, who in 1889 had been shipped off to England to be educated (37). The new opera, Utopia Limited, with its south sea island setting (and British-educated princess) opened at the Savoy on October 7, 1893. Although widely praised by the critics, the opera enjoyed only moderate success with the public and closed after 245 performances.

Utopia Limited satirizes many conventions of the Victorian age and, as such, is rather esoteric for American audiences. Worse yet, the wounds of the carpet quarrel were never completely healed, and the rapport between the two artists was awkward at best. The opera is rarely performed today; but given a few judicious cuts, imaginative direction, and a competent cast, Utopia Limited offers many delights.

This was the name of Sir Thomas More’s imaginary island with its ideal (in his eyes at least) social and political systems (215). The name in Greek means “no place” or “nowhere” (25) and has come to mean any ideal system governing human existence.

A limited company is equivalent to an American corporation in that the shareholders cannot lose more than their investments if the enterprise becomes bankrupt. (The word “limited” implies limited liability.) What particularly galled Gilbert was that the entrepreneurs who form a limited company are thus overly protected, being required to pay debts only to the extent of their declared capital (as brought out by Mr. Goldbury near the end of the first act). Gilbert’s venom may have been inspired by the Gurneys, a wealthy family mentioned in Trial by Jury. In 1865, after several generations of Gurneys had grown rich in the banking business, they formed themselves into a limited-liability company, and then went into bankruptcy the following year, leaving unpaid debts of eleven million pounds sterling––something like sixty million dollars. The Gurneys themselves lost hardly a shilling. Wolfson (322) has a more intriguing target: Richard D’Oyly Carte, himself. At the time Gilbert was writing Utopia Limited, Carte was busily engaged in some maneuvers to sell shares in his money-guzzling Royal English Opera House. Although Gilbert and Carte had returned to some semblance of civilized relationship following the famous carpet quarrel, Gilbert still had an ax to grind––or at least that is Wolfson’s thesis. A remarkable sidelight to all this occurred during the D’Oyly Carte revival of the opera in 1975. Michael Rayner, playing the role of Mr. Goldbury (the exponent of limited liability) came on stage made up and dressed to look like the Vanity Fair cartoon of D’Oyly Carte, complete with cigar, cane, and roll of blueprints under his arm.

Two years before the opening of Utopia Limited the song Ta-Ra-Ra-Boom-Der-Ay became a great hit in English music halls and elsewhere (158, 161, 254, 283, 302). Tarara’s name thus teems with less-than-hidden meaning. Aurora (18) tells us that the song originally appeared in the French operetta Miss Heyett, composed by Edmond Audran. Stone (284) adds that the music was used as the theme song for TV’s Howdy Doody Show.

Someone second in authority to the Lord Chamberlain, which see below.

In monarchies the Lord Chamberlain is a court official who manages the royal household and ceremonial affairs. In Gilbert’s day one of the Lord Chamberlain’s deputies was required to license plays and other theatrical productions. He was, in effect, a censor –– and, as such, an occasional thorn in Gilbert’s side. Huston (158) calls attention to the fact that since the Lord Chamberlain’s duty was to shelter the stage (from anything offensive) you might say that British drama was sheltered in his lee, hence the name Dramaleigh. Egad! See also The Mikado and The Gondoliers.

Quoting Goodman (142): “One of the two cavalry regiments of the Household Division, the other being the Blues and Royals. They haven’t strictly been bodyguards since the sixteenth century, and if you asked the Queen who her military bodyguard was she would say ‘The Yeomen of the Guard.’ ” Prestige (245) sheds additional light, explaining that the two regiments perform ceremonial duties attending the sovereign on state occasions. They also do sentry duty at Whitehall. He concludes: “Both regiments are very tough soldiers; the officers are aristocratic and wealthy, and are much more than military bodyguards.” Brewer (56) says all these manly fellows have to stand at last six feet tall. Barker (25) adds that they wear a brass helmet, with long white plumes, and a red tunic over which a metal breastplate is worn when on mounted duty. See also Cox and Box.

An auditor in a government or other agency (in this case at the royal palace) –– the hard-hearted devil who controls spending and examines all accounts.

Knight Commander of the Bath, one of Britain’s highest honors. Can this be the erstwhile captain of H.M.S. Pinafore? If so, he must be Josephine’s husband (formerly mistakenly called Ralph Rackstraw) and not her father (formerly mistakenly called Captain Corcoran). As Lady Blanche observes, “This sounds involved. It’s not. It’s right enough.” See also The Sorcerer and HMS Pinafore.

This is Gilbert’s pun on London’s Central Criminal Court, usually referred to as “Old Bailey,” hence “the bar of Old Bailey.”

Bradley (48) explains that the 1888 Local Government Act created democratically elected county councils in place of administration by justices of the peace.

You guessed it: the French word for “governess.”

In Greek legends, lotus plants bore fruit which, when eaten, caused dreamy forgetfulness. You may remember that some of Ulysses’s sailors succumbed to that treacherous temptation.

Utopia, Ltd., Act I: 3312
Poppydom [For visions come from Poppydom]

As in opium dreams.

An ancient stringed musical instrument somewhat like a small harp.

A musical instrument much like a mandolin, with six or more pairs of strings. It was popular in the fourteenth and fifteenth centuries. See also The Yeomen of the Guard.

A kind of old-world pigeon, noted for soft cooing and devoted attachment to its mate The turtle is derived from the Latin turtur, which Shipley (266) says is echoic of the dove’s cooing call. See also The Yeomen of the Guard and Cox and Box.

The women’s college at Cambridge. It was founded by Emily Davies in 1869 as a college for women in Hertfordshire, but moved to Cambridge in 1873 (48). The concept of college education for women was still looked upon with misgivings at the time the opera was written.

Utopia, Ltd., Act I: 3318
Anglicized [to be completely Anglicized]

Utopia, Ltd., Act I: 3319
Coruscation [a coruscation of impromptu epigram]

That which emits vivid flashes of light.

A witty statement, like everyday conversation in a play by Oscar Wilde.

A telling clue:Wolfson (322) shows a page from Gilbert’s plot-book in which the Utopian language is indicated as “gibberish.”

“A paper cylinder which explodes when pulled asunder” (75). These are what Americans used to call party poppers (274) and the English call Christmas crackers (294). They were invented in 1847 by a confectioner named Tom Smith of Finbury Square, London (284).

The allusion is to reducing excess pressure in a boiler by allowing some of the steam to escape directly into the atmosphere. The expression has come to mean relieving oneself of anger or frustration by complaining to anyone who will listen. Isn’t that what friends are for?

A ruler having absolute power over his subjects.

A periodical devoted to news about the personal affairs of the upper crust.

Refers to the Roman emperor Heliogabolus (or Elagabolus). We are told (105) that he was born in a.d. 204 and was named Varius Avitus Bassianus. (Do you suppose that first name reflects on there being various possible fathers?) While a youth he was appointed high priest of the Syro-Phoenician sun god Elagabol, and thereupon assumed the name Elagabolus. Appointed emperor after a military revolt in a.d. 218, he imposed the worship of Elagabol upon his subjects. Historians believe his religious rites involved human sacrifice. He appointed obvious misfits to high office and sent more than his share of dissident generals to early graves. His reign was marked by openly held homosexual orgies. He was killed by the Praetorian Guard after only four years in office. But that was quite enough.

Harry Benford at his online typewriter.